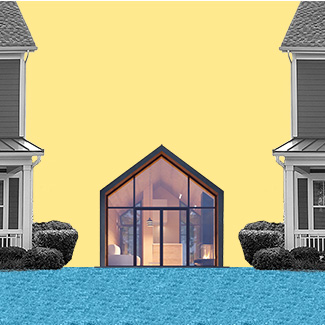 Ready to chuck the clutter, chaos, and big fat mortgage? It might be time to “tinysize” your life
For a growing number of Minnesotans, downsizing is becoming “tinysizing.” Drawn by the promise of a simple, uncluttered life where possessions are pared down to essentials, these homeowners are investing in dwellings that average 186-square feet or less. Models of minimalism, the typical tiny house has a compact galley kitchen, a living area with a small couch, a bath and shower that’s not much bigger than an airline lavatory, and a loft with a bed.In a state where the average suburban home is at least 2,300 square feet, the idea of living in a house the size a large bathroom can be claustrophobic and stifling. But for the hundreds of Minnesotans now inhabiting tiny-home communities around the Twin Cities and Duluth, abandoning space and stuff is more than a fair trade for the freedom from big mortgages and the chores, maintenance, and expensive upkeep of larger homes. Tiny-house owners typically have more disposable income to indulge their passions, and tend to give more time and energy to their friends and communities.

“Tiny living isn’t just about tiny houses. Tiny living is about life simplification; about doing what makes you happy,” said Jenna Spenser, a filmmaker who regularly posts videos about the tiny-house lifestyle on her website, Tiny House Giant Journey. “I don’t work for my house, it works for me. . . . It’s not going to be a burden on you, like a lot of houses are. It’s going change your life. It’s going to help you reach your dreams. . . . And that’s what the tiny house movement is to me.”

Although priced dramatically lower than conventional homes, tiny houses are not cheap—at least not by the square foot. Recently, a 176-square-foot tiny house on wheels in Moorhead sold for $53,000—or about $300 a square foot. By contrast, a 2,300-square-foot home selling for $350,000 is closer to $150 a square foot. A lot of the expense comes from the high degree of customization for things like cabinetry, stairs, bathroom, water heaters, kitchen appliances, and other features. Still, because the overall cost is so low, nearly 70% of tiny-home owners do not have a mortgage. And those that do are able to pay them off within a few years as opposed to decades.

Demographically, tiny-home owners skew older. Almost 40% of them are over 50, and more than half are women. They tend to be highly educated—twice as likely to have a master’s degree as the average homeowner. Many have owned conventional homes but downsized after raising children, divorcing, or the death of a spouse. Across all age groups, they are environmentally conscious and chose a tiny home in part to lower their carbon footprint and overall impact on the planet. And whether their homes are permanently anchored on concrete slabs or on wheels and ready to roll, tiny-home owners save enough on house-related expenses to travel more often than owners of conventional homes.

While saving money is a big plus, the urge to declutter and simplify is one of the driving forces behind the tiny-house movement. This is an especially big factor for women. In a study of married couples with children, the Journal of Personality and Social Psychology found that the burden of housework tends to fall unequally on women. Their overall stress was higher than that of their spouses, as measured by raised levels of cortisol, a hormone released by adrenal glands. Clutter, and the cleaning projects associated with it, played a large role in anxiety and unhappiness.

For Minnesotans who want to toss the clutter, ditch the big mortgage, and go tiny, there are several factors to consider. First, check out the building and zoning codes in the community you would like to live. Some cities do not allow tiny homes, and others impose tight restrictions on where the homes can be placed. Duluth and St. Paul recently changed zoning laws to allow tiny houses.

Minnesota law favors tiny houses that are built on site, attached to a foundation, and intended to be permanent. In official parlance, they are classified as accessory dwelling units (ADUs). By contrast, tiny homes mounted on wheels are designated as recreational vehicles. Strict laws in many Minnesota communities often make it illegal to park such dwellings, even if you own the land. One exception is The Sanctuary Minnesota Village, a privately owned parcel where owners of tiny houses on wheels can lease parking spaces.

ADUs must meet all the building codes for normal dwellings, plus additional requirements for safety and habitability. This includes minimum sizes for bathrooms, kitchens, and loft areas; openings for emergency escapes and rescues; and specific codes for electric, plumbing, and mechanicals. Learn more by visiting the Tiny House Guide to Minnesota.

If you’ve been thinking about going tiny but aren’t ready to make the big move, you can taste the minimalist lifestyle by renting a tiny vacation getaway in Minnesota. Ultimately, while small spaces and less stuff might not be for everyone, there are elements of tiny-house philosophy that can bring more order, less clutter, and greater happiness to even the most palatial homes. As decluttering guru Marie Kondo advises in her book, The Life Changing Method of Tidying Up, if something doesn’t “spark joy,” get rid of it. Whether this perspective helps you clean out a closet or empty an entire house, it could mark the beginning of a fulfilling journey, no matter how tiny or great.

Inventory is up, but high interest rates continue to dampen activity MINNEAPOLIS (January 11, 2023) — In December,…

Honey, I Shrunk the House. . .  By MNR News Ready to chuck the clutter, chaos, and…